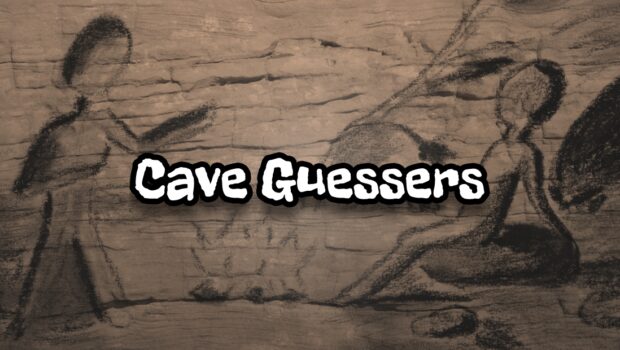 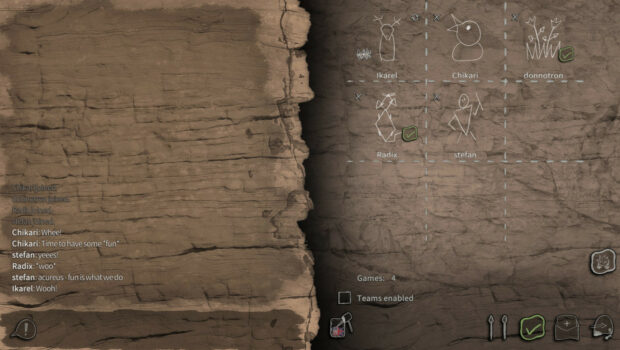 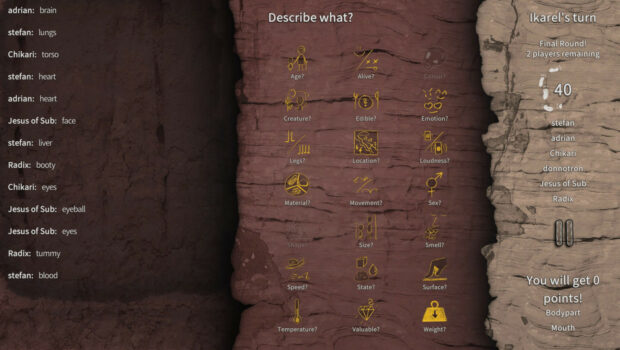 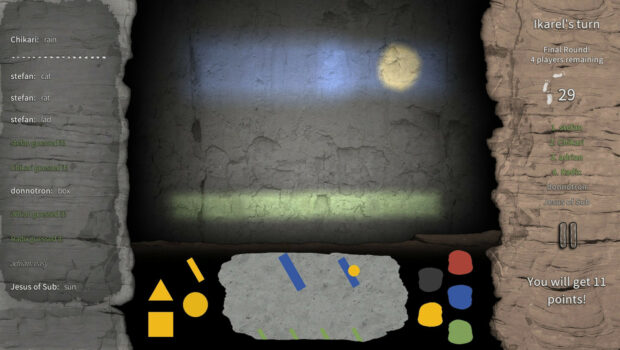 Cave Guessers is a casual party guessing game for up to 16 players with currently 4 individual modes that can be combined to a tournament.

Cave Guessers is a casual party game for up to 16 players and will be available in 8 languages.
The 4 game modes all ask one or all players to describe a prompt and then have remaining players guess the original prompt. In the version planned for release, prompts are randomly selected from game-internal default word lists. Players will be able to create their own lists via the game-internal editor, and will be able to share them with other players via the Steam workshop. UI icons and characters are hand-drawn.

First mode: Shadow on the Wall — One player receives a prompt and within a set time tries to recreate the prompt combining several shapes in either opaque black or transparent blue/red/green/yellow. The shapes they select cast a shadow (or light) on the cave wall. Other players try to guess the prompt based on the shadow figure they see. All players take turns in a round.

Second mode: What's that tune? — All players each select from a range of popular song names, and then in a set time try to re-compose the song, drawing lines that are assigned either a whistle, a clap, or a hum sound. At the end of the round, all compositions are played and guessed consecutively.

Third mode: Break it down — One player tries to describe a prompt using only concepts. A "Rose" might thus be described as "Creature: Plant", "Colour: Red, Green", "Emotion: Love", "Smell: Pleasant". All other players try to guess the prompt. They receive 2 hints: The category of the object (e.g. Nature), and the number of letters in the prompt (e.g. 4).

Fourth mode: Forbidden words — One player tries to explain a number of prompts without using any of the forbidden words also shown. They type, and guessing players see what they type in real-time. There is no backspace, so any character once typed will remain. One player is assigned the role of "watcher" and double-checks no prohibited words are being used. If they are, the prompt is discarded, and the next prompt is shown. After 1 minute players swap roles.

All modes can be combined freely (and with variying round numbers) for a tournament mode. More modes are planned!

Acureus (GmbH) was founded in 2021 after the success of the founder's first casual party game, Draw & Guess. Acureus (GmbH + Ltd) in total consists of 7 international members – 4 of which are working on the Cave Guessers project, all German citizens and living in Bavaria.
As socially-active gamers we love turning our creativity into games that allow players to have a great time with their friends – or find friends along the way.
With a background in Computer Science our hearts beat for technical innovation and non-standard solutions. Even if that means taking the more difficult road. Always stay a-curious!