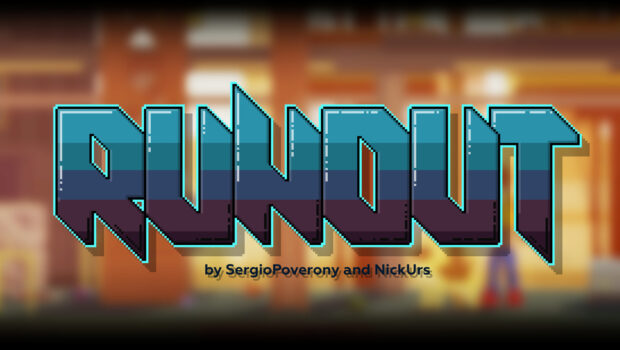 A dynamic runner-platformer with logic puzzles set in a future setting. Midcore-Hardcore.

The RunOut is a dynamic runner-platformer with logical puzzles. The main setting is the future. The game difficulty is between midcore and hardcore.

The player always runs, in the event of a collision with a barrier or wall, he turns in the other direction. It happened as a result of a hacker attack on the servers of a corporation that produces exoskeletons. Most of the exoskeleton holders have died. The survivors began hunted by the police and criminal groups. Some exoskeletons have special capabilities, such as shooting, moving acceleration, and time slowing. These abilities used throughout the game, depending on the perks you need for the special mechanics of each level.

Seven biomes are planned in the games, with the10 levels on each biome. Every fifth-level with changed gameplay. At present, the 4th biome under development.

The player must jump in time, dodge, shoot, speed up and slow down, as well as solve logical puzzles that allow you to pass the level. All this is supported by dynamic music. Throughout the game, between levels, the player sees animated intro scenes.

My name is Sergey (AKA SergioPoverony) Poverennov. I live in the Urals. In the city of Ekaterinburg. This game was started in october-november 2020. In the beginning, I collected everything on prototypes. The game consisted of primitives. I only had the main character. Like most, I just created different mechanics, tested them, and then worked more deeply on them.
RunOut mostly a runner, a player automatically running, and a platformer with solving logical puzzles. It's difficult. I like midcore and hardcore games. I posted images and gifs in different groups, looking at people's reactions. Then was assembling the prototype without any or good graphics and showing it in different communities, in Russia and abroad. Mykola (AKA Nick Urs) Ursatiy from Ukraine addressed me, we already worked with him on a game project 3-4 years ago. He offered to join the team and be a pixel artist. I put on my shoulders not only the graphics but also a great burden of my criticism. That's how we internationally make the game RunOut.