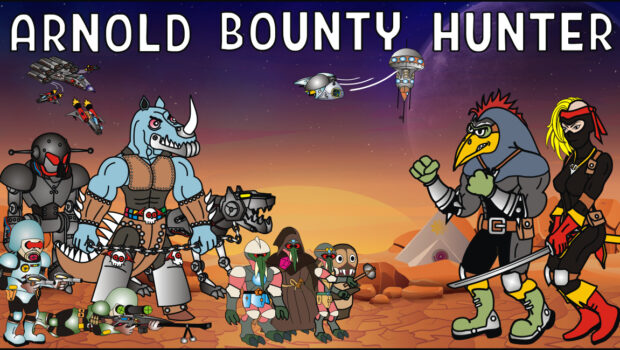 Spiritual heir Battletoads: adventures on an unknown planet with a variety of mechanics.

Arnold Bounty Hunter - it is a fantastic adventure according to genres like Beat 'em up / Shoot' em up / Platformer, which was created as the spiritual heir of the iconic classic games of the era of the NES (Battletoads, Double Dragon). The heart of the project is diversity and complexity. Each level contains unique mechanics and is not similar to the previous levels.

The main characters of the game are Arnold and Miko, bounty hunters. They receive a contract to capture a very dangerous criminal, the leader of the Star Corsairs space pirate clan. But having begun the task, they fall into a trap, and crash on a little-studied planet LV-4.26 in the Zeta Grid cluster. To survive and complete the task, Arnold and Miko will have to endure many dangerous adventures.

Our team consists of two people and this is our first project. I have always dreamed of joining the creation of computer games, because they are a very important and dear part of my life. Time is passing quickly, 30 years have passed, and I said to myself "it's time to act."

I also decided that this path does not have to be taken alone, and infected my friend with these ideas. Now we will definitely bring the project to the end, and we will do our best to make it really worthy.