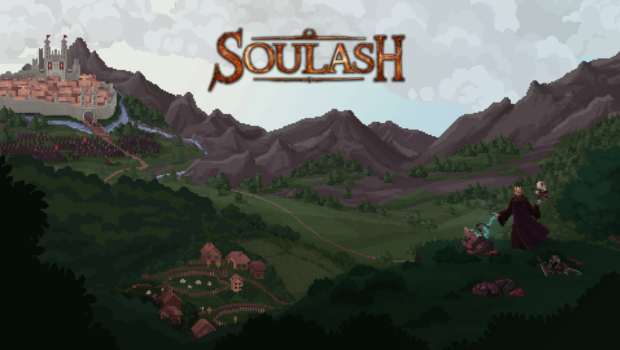 Soulash is a fantasy roguelike where you take the role of a forgotten god set on destroying the world.

Eat the villagers, murder bunnies, milk cows, or exterminate gods! Soulash is a traditional, turn-based roguelike where your goal is to consume the souls of the living, conquer the vast fantasy world and decide its fate.

This world is yours for the taking

From gnome villages, through dwarven keeps, into the hot amazon deserts, with massive Capital City and the Black Pyramid. Everything is yours to conquer, destroy and cover in blood.

Your souls are mine

Every soul you take will not come back to life. You can kill everyone in the world and do as you please with what's left. Soulash tells a story of a long-forgotten god that escaped his prison to reign destruction and terror. Everything was born from you and will die because of you.

Fight to the death

Use over 100 different abilities to intimidate, corrupt or exterminate everything in your path in tactical, turn-based combat affected by weather conditions and terrain.

You have no idea how Big Bertha got her hands on the Ring of Invisibility - but it's your precious artifact! Enemies are created with different sets of magic items during every playthrough, just watch out for the peasants casting Armageddon!

Nice day for fishin' ain't it?

Even gods need to rest on Sundays. How about grow some cabbages, milk cows, gather honey, or cook some elves, while chilling at the village you cleared of pests. Soulash has multiple crafting and item production skills available, like woodcutting, mining, harvesting, gathering, threshing, fishing, butchering, skinning, and more.

With in-game editors and configuration files, you can quickly mod a lot of new content into the game. Design your own maps, create your own abilities and professions, add new playable races, items, or weather conditions. You can even make a total conversion mod and create your favorite fantasy world to conquer.

Wizards of the Code is a one-person company established in Bialystok, Poland, and owned by Artur Śmiarowski, specializing in web and game development. Artur has no formal CS degree, but he gained experience in the field by working with multiple tech companies in web development and creating games as a hobby since 2008.

Before Wizards of the Code was formed, Artur started his first company called Black Raven Entertainment, which developed and maintained a web-based MMORPG called Annihilation, released only in polish language, available between 2009 and 2011 when the server had to shut down due to lack of funds. Today not much can be found about the project, but it offered adventuring, PvP, dynamic loot system, auction system, and more.

Currently, Artur works as a Systems Architect / Team Lead at Seachange International and develops Soulash in his spare time. He partered with Urszula "Xiclu" Kempa, a talented artist, who is preparing a graphics mod for Soulash, as an alternative to the ASCII version. Their goal is to release a 1.0 version on Steam and Itch in 2022.